Sermon for the Sunday of the Samaritan Woman 17/5/20 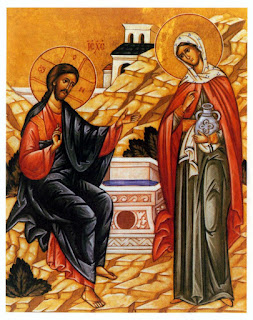 
Samaria had originally been a Jewish region, but the Old Testament tells us that, on account of their lack of faith, God allowed the king of Assyria, Shelmaneser, to attack Samaria and deport its inhabitants to Assyria. He then brought Assyrians from Babylon and other places and settled them in Samaria in order to replace the Jewish population. Initially, these new settlers were pagans, but they eventually accepted the worship of the one God and the Law of Moses. By the time of Jesus, the Samarians claimed to be the true Jews, the true descendants of Abraham, Isaac, and Jacob. However, they rejected all of the other Old Testament prophets, and also disagreed with the Jews on the true location of the Temple, choosing to worship at a different mountain.


So, in the eyes of the Jews, the Samaritans were seen not just as Gentiles, but as usurpers of Jewish land, usurpers of Jewish identity and history, co-conspirators with the enemies of God’s people. They were not just ignorant of the Truth, but perverters of the Truth. This is why Jews had such animosity toward the Samaritans, and why they would normally have no dealings with them. And so the opening phrase, “Jesus came into a city of Samaria” describes a bold and unexpected act.


Just as the Lord came down from heaven, to save the fallen race of man on earth, our Lord leaving the land of the Jews and going into the land of Samaria shows God’s desire to reach out to those who have gone astray and bring them back to himself. At midday, the sixth hour, the hottest part of the day, when most people would avoid any heavy work, a Samaritan woman comes to the well to draw water, and Jesus says to her, “Give me to drink”. The Bible doesn’t give us a reason, but from the story we learn that this woman was previously five times married, and was now living with a man outside marriage, and so perhaps the reason she was forced to come to the well at such an odd time of day was because she was something of an outcast in that city; she was considered a sinner, and she wanted to avoid other people.


The Lord not only does not walk away from her, shun her or ignore her, but he engages this sinful woman from an unclean people in conversation, and he asks her, “Give me to drink”.


As we pray every morning during the six psalms of Matins:
O God, my God, unto Thee I rise early at dawn. My soul hath thirsted for Thee.


Just as the human soul has a natural thirst for God on account of it being created in the image of God, the Lord in His infinite love for mankind also longs for the return of the prodigal son and the lost sheep, He thirsts for the person who has gone astray. This is why he says to the Samaritan woman, “Give me to drink”. In other words, it is as if he is saying to her, “come back to me, I long for your return.”


And these words of the Lord are addressed to each and every human being. Every moment of our life, even the most mundane everyday tasks like fetching water, can become a life-changing encounter with the Lord. As He says elsewhere in Scripture, “Behold, I stand at the door and knock. If anyone hears my voice and opens the door, I will come in to him and eat with him, and he with me” (Rev. 3:20). The Lord is constantly seeking us, constantly knocking at the door to our heart, ready to give us His grace, and to quench our thirst with the living water of the Holy Spirit. The only thing He needs from us is a good disposition, a willingness to open the door. And this is what He finds in the Samaritan woman.


When the Lord says, “Whosoever drinks the water I shall give him in no wise shall ever thirst”, she might not understand what he means, but she responds positively: “Lord, give me this water.”


When the Lord says, “Go, call your husband, and come here”, she responds with honesty: “I have no husband.”


When the Lord with great gentleness reveals to her that he is aware of her sin, she does not become defensive, but she responds with humility, and by that humility she begins to perceive who it is she is speaking to: “Lord, I perceive that you are a prophet”.


At each exchange, the woman becomes more and more open and receptive, allowing Christ to reveal to her higher and higher truths, until she finally understands that the person standing in front of her is the Messiah.

At the end of the conversation, the Gospel says “the woman left her waterpot” and went into the city to tell everyone of what she had experienced. She left the waterpot. She was no longer thirsty, just as the Lord had promised. A short while before, she was a sinner coming to the well at midday to avoid the crowds, and now she was running into the city to speak to every person she possibly could about the One who had changed her life. Many of the Samaritans believed because of her word, and the Holy Tradition tells us that she went on to become a great missionary saint, St Photeini, the Enlightened one, who devoted her life to telling the world about her encounter.

At the mid-point of the Feast, O Saviour, water my thirsty soul with streams of true devotion; for Thou didst cry out to all: Any who thirst, let them come to me, and let them drink! O Source of life, Christ our God, glory to Thee!
(Apolytikion of Mid-Pentecost)
Posted by Miklagard at 18:36